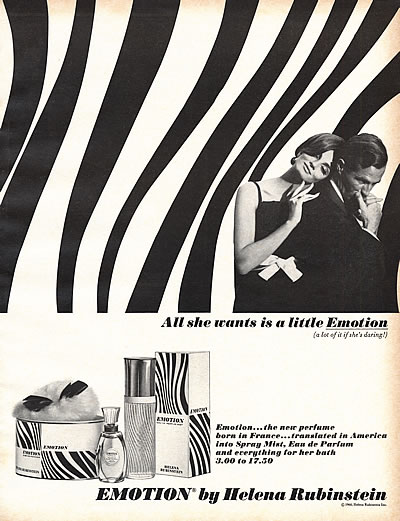 In late 2014, I visited the Jewish Museum to see an exhibition on the life, career, and art collection of cosmetics mogul Helena Rubinstein. The show included materials related to the perfumes released by her brand, which was especially interesting for me. I was particularly curious about the ads for the fragrance Emotion, launched by Helena Rubinstein in 1960.

This ad, which dates to 1965, shows a stylish couple posed against a background of wavy black and white lines that resembles the patterning of a particularly mod zebra. The man is kissing the woman’s hand, or perhaps inhaling her perfume…

The backdrop is really the point, though—we can find an embracing couple in perfume ads from every decade of the past century, but that bold (even overpowering) design places this image squarely in the middle of the 1960s and nowhere else.

Whoever designed this advertisement for Helena Rubinstein was obviously aware of a recent movement in the visual arts: Op Art. Oxford Art Online defines Op Art, a nickname for “Optical Art,” as “painting and sculpture that exploits the illusions or optical effects of perceptual processes.”

In other words, Op Art’s patterns and colors are constructed to trick your eye and your mind into seeing vibrations, movement, and depth where they don’t really exist. The effect can be disorienting.

Bridget Riley was one of the central practitioners of Op Art in the 1960s and 1970s. Here we see her posed against one of her own paintings. She’s the essence of mod/bohemian cool, of course.

Op Art was a brief-lived style but one that had an immediate influence on fashion and popular culture. Riley has recalled a 1965 visit to New York in which she took a taxi up Madison Avenue and was aghast to see knock-offs of her Op Art compositions splashed across dress designs in every shop window. (See this article and this article for details.)

If she had flipped through a magazine that carried the ad for Helena Rubinstein’s Emotion, or stepped into a store that carried the perfume line, she might have had further cause for outrage. The print ad at top, for example, recalls Riley’s Intake (1964) or Arrest 1 and 2 (1965).

And what about this Emotion Eau de Parfum?

It’s hard to miss the packaging’s similarity to “Movement in Squares.”

As Riley ruefully said of her work’s instant fame and influence in America, “The whole thing had spread everywhere even before I touched down at the airport.” She reportedly tried to sue some of the businesses that had recycled her art. (I don’t know whether Rubinstein’s company was one of them.)

What comes around, goes around…and the Jewish Museum’s gift shop even sold a cosmetics pouch that reproduced this ad.

The exhibition catalogue for this “Helena Rubinstein: Beauty Is Power” does mention contemporary art’s influence on Rubinstein’s advertising in the 60s, but it makes no specific mention of Riley. I just wanted to correct that omission here.