I don’t usually say or think much about Jennifer Aniston, because she and her acting career and her romantic travails generally don’t interest me. However, when her début fragrance was released in 2010 and arrived in the United States a year later, she edged her way a bit further into my awareness…

I heard the fragrance was nice enough, but as so often happens, I spent more time looking at the ad than sampling her eponymous scent at Sephora. If  Ms. Aniston was playing a larger part than usual in my conscious mind in 2011, then it was because her ad had touched upon something buried deep in my memory.

I remembered a photograph of Jane Fonda, taken around 1966 when she was in her late twenties. At the time she was breaking out of her image of Hollywood royalty and the “girl next door” by revealing a sexier, more rebellious side. (She would star in Barbarella in 1968.)

Something about the pose, the windblown hair, and the rocky beach landscape seemed to be echoed in Jennifer Aniston’s perfume advertisement.

I first came across this photo in a large, image-stuffed book called The Best of LIFE, which reproduced hundreds of pictures from LIFE magazine. The book credited this photograph to Jean-Pierre Lagarde.

There are only so many ways that a female body can be arranged for a photograph, of course, especially when you’re trying to achieve a sexy-but-not-unpublishable look. Still, I have a feeling that this photo of Fonda has been influential on many fashion/celebrity shoots. 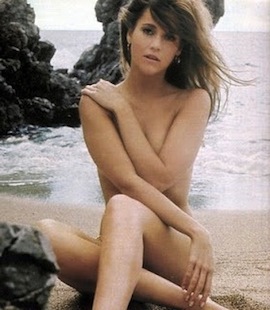 Someone, somewhere seems to have decided that this legs-and-arms-crossed, is-she-really-nude pose seems to suit Jennifer Aniston well, since she has also assumed it for her SmartWater advertisements.

This isn’t the Jane Fonda that I knew from my earlier years, the bodysuit-clad, aerobic-workout goddess. Looking at her life, I’m fascinated by the number of times she has “reinvented” herself.

It’s interesting, how two women can model in similar poses (and hairstyles), against similar backdrops, and create such different moods. Where Jane was going for shock and sex appeal, Jennifer is falling back on her low-maintenance, comfortable familiarity—not reinvention at all. 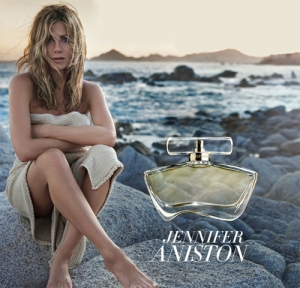 Maybe I’d find Ms. Aniston more intriguing if she did give us something new, once in a while. But, as I said, I’ve never really been a fan. And it’s neither the first nor the last time that the Fonda-on-the-beach photo has been reinterpreted.

A few moments from last night's program about the subway poster designs of Amelia Opdyke "Oppy" Jones, presented by curator Jodi Shapiro of @nytransitmuseum in collaboration with Angelina Lippert of @posterhousenyc. A fascinating mix of transit history, design history, and social history, all centered around a female artist who deserves to be better-remembered...not to mention that some of the posters are still very relevant for today's transit passengers. 🚇
Guess who's celebrating their 100th anniversary this year? Yes, it's that classic among classics, an icon among icons: Chanel No. 5. Join me via @artandolfaction on Wednesday evening to learn all about it, from A (aldehydes) to Z (zeitgeist).
In honor of the lilac bush currently flowering in the local park, I'm wearing a spritz of En Passant from Editions de Parfums Frédéric Malle (2000, Olivia Giacometti), my one and only favorite lilac perfume. 💜
Someone had spring fever earlier today, but now he has settled into a very chill #caturday mood.
A quick trip to the workplace...with time for a Mister Softee before hopping back on the subway.
One year ago today, I gave my first-ever remote scent-lecture via Zoom, through the Brooklyn Brainery @bkbrains. I look forward to the time when we can all gather in person to smell things together again, but I'm also very grateful to all the organizations that have hosted me online, from the Brainery and @artandolfaction to multiple NJ and NY public library systems and the friend who invited me to speak to her seminar at F.I.T. ...and to every single person who attended any of these events! Much more fragrance-related education and inspiration to come, I hope...