“Discover JOY by Dior. Finally, joy is captured in a fragrance marked by enveloping softness and energy, all at once. An ode to pleasure, to life.” (via Dior website)

I smelled this fragrance in Sephora and couldn’t be bothered to request a sample. I don’t even think we’ve reviewed it on Now Smell This; apparently, none of the blog’s four  writers could be bothered. That gives you a pretty good idea of the fragrance’s “energy.”

However, the print ads for Joy, featuring Jennifer Lawrence, have brought me back for a second look. Here’s Ms. Lawrence, damp hair pushed back and neck glistening with drops of water, emerging from some aquamarine ripples (a swimming pool? tropical sea?).

She could be a contemporary interpretation of the goddess Aphrodite, born from the ocean. She could be an evocation of an mermaid—oh, the whole seemingly never-ending mermaid trend! 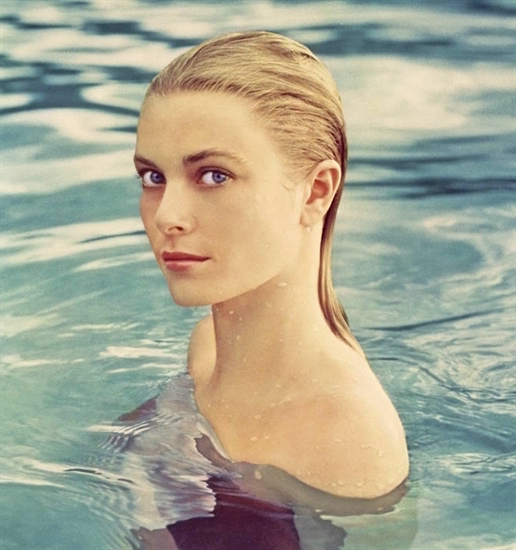 In 1955, the photographer Howell Conant photographed the actress Grace Kelly vacationing in Jamaica. This photo became the cover image for the June 24, 1955 issue of Collier’s Weekly. Although the straps of her one-piece bathing suit were visible in other shots, here she had released them, leaving her shoulders bare (other than the drops of Caribbean water).

An accompanying article by Evelyn Harvey, “The Key to Kelly,” described the informal atmosphere of this multi-day photo shoot, in which Conant captured the star in some semi-candid, off-duty moments. The swimming photos would have been especially striking at this time, when audiences were accustomed to seeing Kelly fully coiffed and made-up on film and in more staged photo shoots. 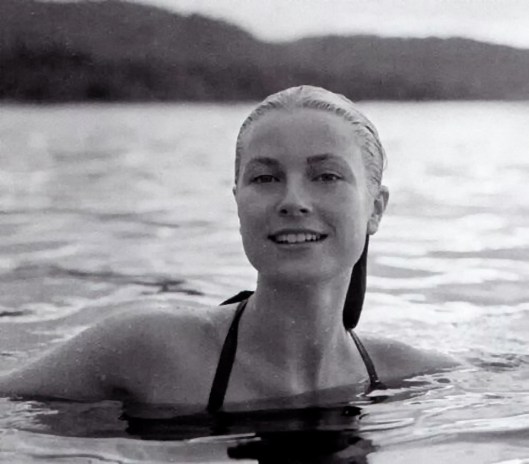 That week in Jamaica, Conant also photographed Kelly sitting cross-legged on a striped beach towel, snorkeling with her sister, eating tropical fruit…just an ordinary beach vacation for a twenty-five year-old woman, if you could ignore the fact that she had already won an Academy Award (for The Country Girl) and filmed three pictures with Alfred Hitchcock. 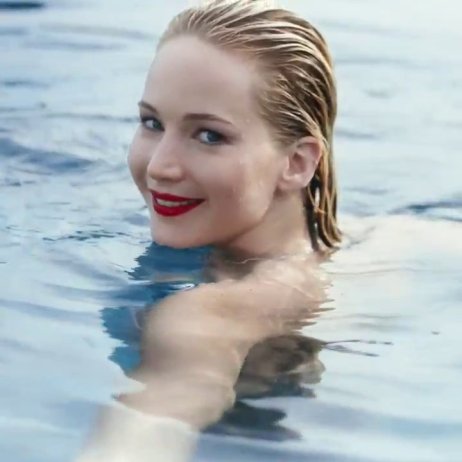 Why take Conant’s photos of Grace Kelly as inspiration? I’m guessing the line of thought was “Old Hollywood glamour,” with an allowance for lots of bare (but classy!) skin.

Like the fragrance itself, the ads for Dior Joy are derivative and quickly forgettable. Pro tip: if you want to own a beautiful floral fragrance named Joy, check out the classic Patou perfume. Really, sometimes the original is just best.

To read more posts in this series, see here.

I watched this episode of "The Mandalorian" and found myself wondering...what perfumes does @amysedaris wear here on Earth? (That's how my mind works.) Voila: a new blog post. Link in bio... 🌕💫👃 . . #amysedaris #perfume #fragrance #themandalorian #scent
Walking in SoHo...on a block that was miraculously uncrowded...and then a man passed on his bicycle, blaring "Into the Groove" on a boombox, and if I looked up and focused on the architecture, it was almost a time-travel moment. . . #soho #architecture #nyc #vanishingnewyork #ephemeralnyc
Will it actually snow today? We shall see! 🌨️❄️🌨️🏙️. Details of George Bellows, "Snow-Capped River," 1911, in the collections of the Telfair Academy in Savannah, GA. . . #winter #letitsnow❄️ #georgebellows #telfairmuseums #telfairacademy #AmericanArt #ashcanschool #americanpainting #hudsonriver #palisades
My visits to Twisted Lily are never long enough to hold all the scents I want to smell and all the conversations I want to have! Until next time... . . #twistedlily #brooklyn #atlanticave #perfume #fragrance
One day last week at the Botanic Garden cafe. Wish I had more of those biscuits right now...
Yes. . . #nysparenting #butgoodforeveryone