The Art of Perfume Advertising: Emporio Armani Stronger With You & Because It’s You

Emporio Armani, the diffusion line from Giorgio Armani, released this duo of his-and-her fragrances in 2017. Are they still around? I haven’t even bothered to check. The scents themselves were pretty run-of-the-mill. Their promotional image is the only reason I remember their launch, since it seems to be a nod to an iconic New York City photograph… 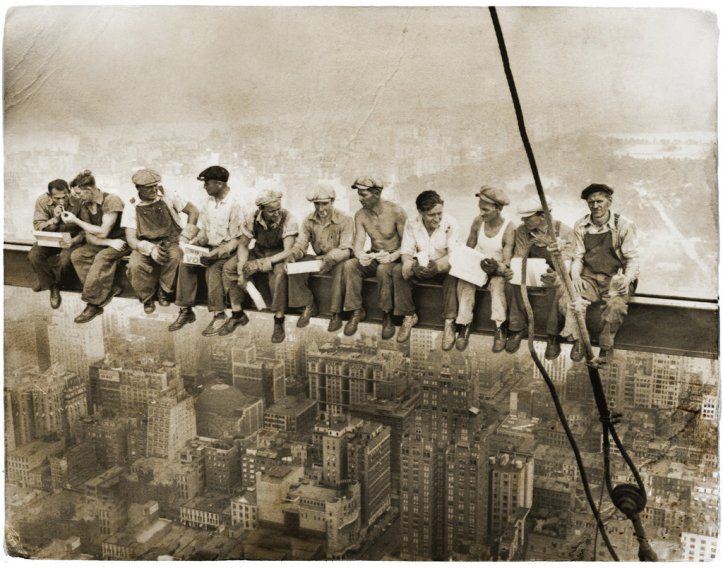 That photo would be Lunch Atop a Skyscraper, a black-and-white image made on September 20, 1932 during the construction of Rockefeller Center. The photographer is unidentified; most of the eleven men sitting on that I-beam hundreds of feet above theManhattan streets haven’t been identified either. (Read this article in The New York Times to learn more about Men at Lunch, the 2012 documentary that delved into the history and context of this image!)

As reporter John Anderson wrote in the Times on November 8, 2012, this vertiginous group portrait has come to embody “the synthesis of immigration, aspiration and determination, the vertical grasp of Manhattan at a time when jobs were scarce and men were desperate.”

Lunch Atop a Skyscraper has been reproduced (and parodied) countless times in every possible media. Some of its homages are pretty tacky, in my opinion, but they bother me less than this fragrance ad.

A crew of immigrant laborers reshaping the Manhattan skyline during the Great Depression…two barefoot models posing as kids on a date. For me, the second image is much less memorable or meaningful.

What do you think?