When you wander through the 4th-floor section of “The World of Anna Sui” at the Museum of Arts and Design (MAD), you may notice a sweet hint of scent in the air. This floor of the exhibition is fragranced — a concealed diffuser releases a faint aura of Anna Sui Fantasia (released in 2017), adding a subtle olfactory dimension to this fashion retrospective.

I had a chance to chat briefly with Anna Sui at the exhibition’s preview on September 10 and to ask about her own taste in perfumes and her fragrance collection. Here are a few things I learned…

1. When I asked her to name an early fragrance memory, Anna mentioned her mother’s taste for classic Chanel No. 5. Anna now owns one of her mother’s bottles of No. 5 in its original, special-edition gift box. 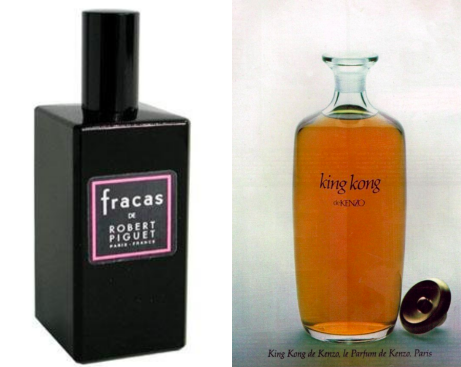 2. Anna’s own choices in perfume have ranged from traditional to more avant-garde. She wore Robert Piguet Fracas (1948) after it was reissued in 1996 — “when everyone was wearing it.”

Earlier on, she loved Kenzo King Kong (launched in 1980): “When I heard it was being discontinued, I went out and bought like 30 bottles and I still have them in their boxes. They must have gone bad by now!” (Ed. note: if they’re still in those boxes, they probably smell great, actually!)

Anna Sui at a Secret Wish launch event, 2005 (via GettyImages)

3. She has a sentimental favorite among her fragrance collection: “Secret Wish has always been very close to me.” Secret Wish was developed by perfumer Michel Almairac and was released in 2005. Its bottle is topped by a tiny seated fairy.

4. One of Anna’s longtime style inspirations is Anita Pallenberg (1942-2017), rock-and-roll muse and companion to The Rolling Stones. If she could go back in time and share one Anna Sui fragrance with Pallenberg, it would be the fruity Sui Love (2002) in its psychedelic, Art Nouveau-inspired butterfly bottle.

5. Her approach to the Anna Sui fragrance collection (licensed initially to Wella/P&G, then to Inter Parfums since 2012) is both poetic and practical, as I learned when I attended her conversation with curators Dennis Nothdruft (from London’s Fashion and Textile Museum) and Barbara Paris Gifford (MAD) on September 14.

Just like makeup, Sui says, perfume is part of the “head to toe” style she seeks to create. At the same time, it’s an essential means of revenue for her brand. “Every designer dreams of having a makeup and fragrance line. And then that’s really what supports you.”

As you can tell, I’m more than a little excited about this show — it’s not every day that my favorite living designer is the subject of a retrospective (including perfumes!) in NYC. I’ll be posting more about it soon. Stay tuned…!