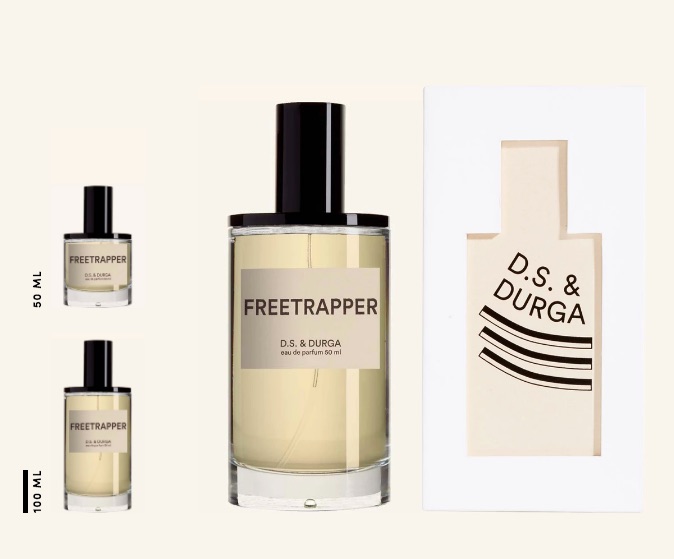 “Freetrapper is our most modern masculine scent, but its origins are early America.”

Freetrapper is a fragrance from the NYC-based niche perfume house of D.S. & Durga, whose website goes on to explain,

“Beaver trappers were the cowboys of early America. Renegade mountaineers of the Jacksonian era who cut trails through the wild in search of beaver pelts — prized by hatters, doctors, and perfumers. Dark cedar, snake root, synthetic beaver castor, and wild bergamot.”

So far, so good. Frontiers…settlement…hunting…goods and trade. Earthy, animalic smells. I get it.

But there’s more to read, plus this ad that’s been appearing in my social media feeds lately:

Here, a bottle of Freetrapper sits atop a small fur-covered pedestal among other furred shapes and what seems to be a fur-swaddled ashtray.

“American trails going west were cut for a few important reasons. Lewis & Clark led the first expedition to survey the land acquired in the Louisiana Purchase. The government wanted to find a way across the huge expanse of the western territories, hopefully by water. They hoped to establish American presence in a native land, and to set up trade routes for a much needed commodity: beavers. Beavers were happening rodents in the 18th & 19th centuries. They had been depleted in Europe where their fur and testicles were used for hats, cosmetics, and tanning. America was full of beavers.”

Am I thinking like a teenage boy, or are they really emphasizing the word “beaver”?

And am I thinking like an art historian, or is there a weird association between that ad and an iconic work of Surrealism?

Several famous Surrealist sculptures make use of unexpected juxtapositions — Salvador Dali’s lobster telephone, for example, or Man Ray’s Gift, an ordinary flatiron made sinister, even violent, by a row of sharp tacks applied to its flat surface — but Oppenheim’s Object is one of the most important and indelible.

Let’s turn to the Museum of Modern Art for the official explanation.

“This Surrealist object was inspired by a conversation between Oppenheim and artists Pablo Picasso and Dora Maar at a Paris cafe. Admiring Oppenheim’s fur-covered bracelet, Picasso remarked that one could cover anything with fur, to which she replied, ‘Even this cup and saucer.’ Soon after, when asked by André Breton, Surrealism’s leader, to participate in the first Surrealist exhibition dedicated to objects, Oppenheim bought a teacup, saucer, and spoon at a department store and covered them with the fur of a Chinese gazelle. In so doing, she transformed genteel items traditionally associated with feminine decorum into sensuous, sexually punning tableware.” (MoMA website)

Here’s Oppenheim herself posing with her most famous creation.

“…[T]he sculpture became the receptacle of all kinds of theories, fears and longings. This being the age of Freud, a gastro-sexual interpretation was inescapable: the spoon was phallic, the cup vaginal, the hair pubic. For some, the tongue-shaped spoon brought to mind unpleasant sensations of a furry tongue. Others experienced unease at seeing a graceful item of the tea table transformed into something decadent and animalistic; some gagged at the thought of getting a hair or damp tea leaves in their mouth; still others wanted to stroke it.” (NPR)

Now you see why that Freetrapper photo made me stop and look twice.

I can’t help laughing at D.S. & Durga’s appropriation of this imagery for an ad promoting their “most modern masculine scent” with “mucho sex appeal.” I don’t know who puts together their promotions, but given the brand’s interest in visual art and popular culture, I can’t imagine that someone didn’t make this connection during the process.

I wonder what Ms. Oppenheim would think!

Object has inspired various homages by other artists and artisans, as well as this bracelet, an upscale version of the bangle Oppenheim was wearing during her infamous café meeting with Picasso and Dora Maar — price “on request.”

“Following his inclusion of the work in MoMA’s 1936–37 exhibition Fantastic Art, Dada, Surrealism, Alfred H. Barr, Jr., the Museum’s director, remarked, ‘Few works of art in recent years have so captured the popular imagination…. The ‘fur-lined tea set’ makes concretely real the most extreme, the most bizarre improbability. The tension and excitement caused by this object in the minds of tens of thousands of Americans have been expressed in rage, laughter, disgust or delight.'”

Further reading: this essay at Smarthistory.

For most posts in this series, see here.

Admiring these just before the rain began.
Yesterday I attended a virtual class led by Dr. Kate McLean, in which we learned about her extensive and fascinating research into smellscapes and then reviewed the individual "smellwalks" we'd taken and documented in advance of the class meeting. Olfaction! Design practice! Written description! Data visualization! The ever-shifting relationships between smell and place, space, time, and humans! Many thanks to @flakybrit for all this enlightenment and to @artandolfaction and @deathandscent for coordinating and offering this session.
April in the neighborhood.
Even with the additions of the social distancing signage and the hand sanitizer stand, these elevators are still some of my favorite mini-landmarks in NYC. Happy to see them again!
The pandemic has become a time of self-reflection for so many of us.
The Pulitzer Fountain's Pomona (Karl Bitter, 1916) will always hold a special place in my heart. She was looking especially beautiful today. 🌸