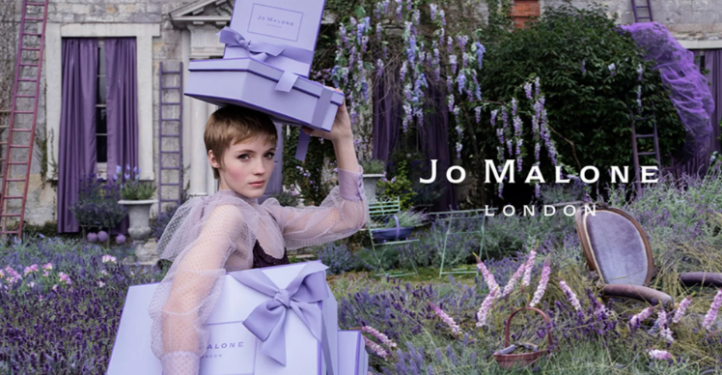 Jo Malone’s limited edition collection for Spring 2020 is Lavenderland, a trio of fragrances that evoke “an enchanted world of violet visions, where English lavender meanders in purple pathways across the countryside.”

As usual, the visuals for this launch are beautifully styled and photographed…

Jo Malone’s creative team has artfully staged a languid house party of slender and nattily attired young things drifting through a misty garden of lavender in bloom, yes, as well as delphinium, iris, and wisteria.

The wisteria, in particular, reminded me of one of my favorite movies. Can you guess?

Yes, I’m thinking of Howard’s End (1992), directed by James Ivory and produced by Ismail Merchant. I went to see Howard’s End at the Paris theatre (now closed; alas!) with my mother when it was first released.

This film inspired me to read the original novel by E. M. Forster and, more to the point here, inspired my deep love of wisteria vines in bloom. Even now, I visit the Brooklyn Botanic Garden every May to admire the wisteria-laden trellises there.

I had a quick sniff of Jo Malone Wisteria & Lavender Cologne in Bloomingdale’s last month, and it didn’t really fulfill my wish for a true wisteria perfume; then again, no fragrance ever has. Nothing can compete with the experience of sniffing the real-life flower.

That cluster of semi-reclining models amongst the flora and greenery made me think of this publicity shot for Howard’s End, in which four of the film’s actors (who play members of the wealthy Wilcox family, owners of the titular house), pose gracefully on the lawn.

There are plenty of purple blossoms in the Wilcox flowerbeds, too, although I’m not able to identify them.

Here’s another view of the Lavenderland wisteria, plus some oh-so-casually placed decorative urns and garden seating in the middle-ground and foreground.

Some of the small trees and shrubs have been veiled in purple tulle, and one of the models is catching butterflies with an old-fashioned net while she stands amongst the flowers.

One of the most lyrical scenes in Howard’s End is the Leonard Bast’s (real or imagined?) walk through a wooded field of bluebells, inspired by a passage from George Meredith’s The Ordeal of Richard Feverel (1859).

Was a screen capture from this scene pinned to some inspiration board at Estee Lauder Companies’ Jo Malone offices? I wonder.

(Come to think of it, I also make annual pilgrimages to Bluebell Wood at the Brooklyn Botanic Garden; again, this film is the reason!)

The models in this campaign are all lovely to look at, of course, and they’re clad in a spectrum of purples—lavender and lilac, mauve and damson and mist. (I feel like I’m narrating from a 1990s Tweeds catalogue.)

The Fair Isle v-neck vest is a nice touch, although it makes me think more of Brideshead Revisited than Howard’s End…

Here, we see Helena Bonham Carter taking in the morning air (and that wisteria) from a window at Howard’s End.

Give the short video for Jo Malone a quick look…and let me know what you think. Plus: does the classically inspired music remind you anything of Richard Robbins’s soundtrack for Howard’s End?

If my hunch is correct, this isn’t the first time Jo Malone has looked back to English culture (literature, art, etc.) for inspiration.

And…if you’d like, you can also re-read my 2017 post about the visuals of Jo Malone’s English Oak collection.