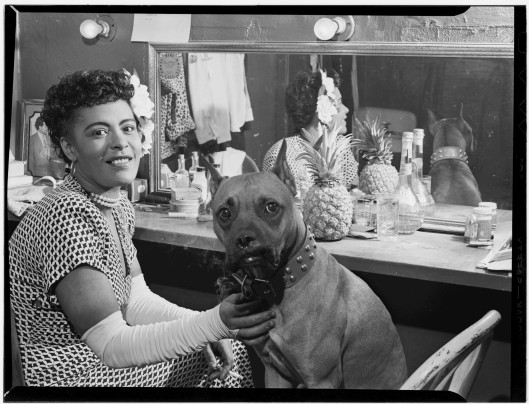 I’ve been listening to her music since my early twenties but I never thought to wonder, until today: what was her favorite perfume?

Sometimes it’s impossible to learn what a celebrity’s true scent-preferences were, or to document the claims that have been made about that celebrity by various perfume houses after the fact. In this case, I was delighted to find an answer in a primary source, from Holiday’s early career.

I came across this 1937 article in an excellent post (from 2014) by My Pretty Baby Cried She Was a Bird.

The article was written by reporter Lillian Johnson and ran in the Baltimore Afro-American on October 23, 1937. It featured a discussion of Holiday’s favorite jewelry, dressing-room garb, cosmetics (Max Factor), and — yes — perfumes. 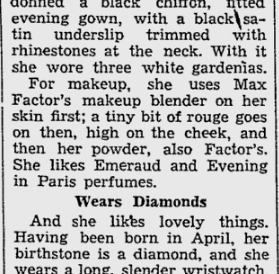 Lillian Johnson wrote that Billie Holiday was fond of Coty Emeraude and Bourjois Evening in Paris. (I’m so excited by this piece of news, I can’t even tell you…ha!)

Emeraude was released by Coty in 1921 and was widely available in the late 1930s. It was a citrus-amber “oriental” perfume, created by François Coty, with notes of bergamot, lemon, lemongrass, and orange; rosewood, rose, jasmin, and ylang ylang; vanilla, ambergris, opoponax, benzoin, sandalwood, and patchouli. (It’s often been compared to Guerlain Shalimar, another classic.)

The ad above ran in another Baltimore newspaper in 1937. Emeraude was also available in a range of scented body products, including dusting powder and bath salts. I wonder whether Lady Day ever immersed herself in a full Emeraude regimen.

Bourjois Evening in Paris was launched in the late 1920s and was created to appeal to the American market. It was developed by the master perfumer Ernest Beaux (most famous as the “nose” behind Chanel no. 5!) as a sweet floral fragrance with notes of violets, bergamot, tarragon, and cyclamen; linden blossom, clover, lily of the valley, lilac, rose, iris, carnation, and jasmine; vetiver, styrax, amber, incense, heliotrope, musk and benzoin.

As we can see in the Rexall’s ad above, Evening in Paris fragrance could be complemented by matching dusting powder and Evening in Paris cosmetics! (Billie already had her faves from Max Factor, but it’s still fun to know that these existed.)

Chez moi. My own photo.

Part of the reason I’m so happy to learn this: I already own vintage (1960s?) bottles of Emeraude and Evening in Paris. I’m going to wear one of them tonight while listening to Ms. Holiday.

(My source for the fragrance notes is The H&R Book: Fragrance Guide, Feminine Notes, Fragrances on the International Market, 1984.)

With much gratitude to My Pretty Baby Cried She Was a Bird for finding this article and citing her source!!

3 thoughts on “Billie’s Best, on Her Birthday”

Bill Traylor, Untitled (Figures and Construction with Cat), ca. 1939–1942, gouache and pencil on cardboard. Image via The Metropolitan Museum of Art and Art Resource. . . #billtraylor #blackartist #selftaughtartist
Lucy T. Pettway (American, 1921-2004). Quilt, Housetop Pattern, ca. 1945. Cotton. Brooklyn Museum, Gift of the Souls Grown Deep Foundation from the William S. Arnett Collection, 2018, 2018.37.2. © artist or artist's estate . . #blackartist #quilt #geesbend #geesbendquilts #lucytpettway #womanartist #brooklynmuseum
Detail of Barkley Hendricks, Miss T, 1969. Oil and acrylic on canvas. Philadelphia Museum of Art, 1970-134-1. Purchased with the Philadelphia Foundation Fund, 1970. . . (I remember this painting well from the years I worked at the PMA..). #barkleyhendricks #philadelphiamuseumofart #blackartist #blackartmatters #portrait
Chakaia Booker, Bitches Brew (Act 1), 2002. Rubber, steel, and wood. Newark Museum. Friends of American Art Purchase, 2003.29 . . #chakaiabooker #sculpture #blackartist #womanartist #newjersey #newark
#blackouttuesday #blackouttuesday⚫️
From the BKM website: "In this piece, spelled out in sparkling coal crystals are the words “something in me wondered ‘What will happen to all that beauty?’” This quotation, from a 1962 essay by James Baldwin (reprinted the following year in the volume The Fire Next Time), is set over a blurred black-and-white image of the Million Man March, a gathering of black social activists in Washington, D.C., in 1995. The accumulation of crystals suggests the mass of participants in this historic event as viewed from above, while the juxtaposition of Baldwin’s words with the image of the march—separated by more than three decades—reminds us of the still-ongoing dialogue about race in America." . . Glenn Ligon (American, born 1960). [Untitled] (Crowd/The Fire Next Time), 2000. Screenprint with coal crystals on paper. Brooklyn Museum, Alfred T. White Fund, 2000.56. © artist or artist's estate (Photo: Brooklyn Museum)