In the lobby at MAD

If you’re a regular reader here, you’ll already know that I’ve been making the most of the exhibition “The World of Anna Sui” at the Museum of Arts and Design by visiting the show multiple times and attending related lectures and films.

On December 7th I went up to MAD for “The Art of an Anna Sui Scent,” a conversation between Anna Sui and perfumer Jérome Epinette. Here are a few photos and notes from that event…

Ildiko Juhasz, Global Director of Communications at Interparfums (which has held the license for Anna Sui’s fragrance line since 2011), introduced Anna and moderated the conversation.

She and Anna began by discussing the connections between scent and memory. Anna mentioned her mother’s fondness for classic perfumes like No. 5 and described her mother’s rose garden outside their Michigan home. 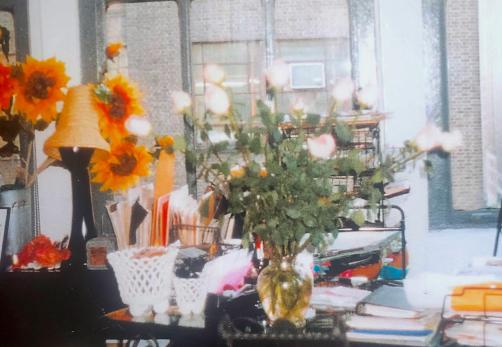 Roses in Anna Sui’s first office, from The World of Anna Sui (2017)

As an adult living in New York, Anna recalled, she began making trips to Union Square Market to buy lavender tea roses for her apartments in Chelsea and, later, Greenwich Village.

Beginning with the classic Anna Sui fragrance in 1999, “rose has been the basis” for many of her brand’s perfumes. Anna described fragrance as “the ultimate accessory” and “the completion of the fantasy” for a fashion designer.

(When she wears perfume, she applies the scent to her hair as well as her wrists, etc.—a trick known to many fragrance aficionados!)

An image of Anna Sui sampling fragrances in her office

Some of the keywords for the brand’s fragrance collection, according to Anna, are “discovery…femininity…romance.” She added with a laugh, “You know you have a hit when the cabdriver says, ‘You smell great.'”

And what about the packaging, so perfectly matched to her fashion’s consistent use of florals, baroque curves, and fantastical creatures? She hopes people will love the packaging as much as she does and keep it even when the bottle is empty. “That’s part of my obsession and I wanted to pass it along to everyone else.” 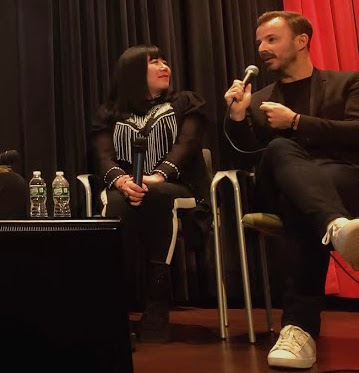 Jérome Epinette has worked with Anna on ten fragrance collaborations, and their rapport was evident on stage.

As a top perfumer with Robertet, a prominent French flavor-and-fragrance manufacturer, Jérome has worked with niche fragrance houses like Byredo and Atelier Cologne as well as mainstream fashion brands like Zara and & Other Stories.

We learned that his mother worked in fine fragrance retail and shared her love of perfume with him — so he’s been having conversations about perfume with knowledgeable women all his life.

In her projects with Jérome, Anna says, “We start with the concept. It has to be part of my world.” 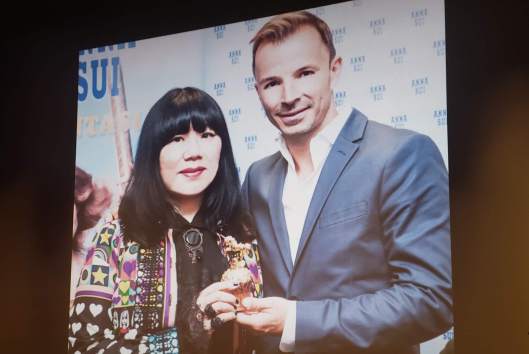 Anna and Epinette with the Fantasia bottle

Anna Sui Fantasia (2017) has been a big success for the brand; it’s a floral gourmand with notes of raspberry truffles and cotton candy, intended to evoke childhood memories of sweets and merry-go-round rides. (At this point in the conversation, assistants from InterParfums passed around blotters spritzed with an accord from Fantasia for us to sniff!)

Fantasia’s unicorn-topped bottle reflects Anna’s longtime love of fairy-tale imagery. One of its visual inspirations was Andy Warhol’s illustration of a Shocking-pink unicorn for a Schiaparelli glove advertisement.

As Anna said during the Q&A portion of the event, when asked about her creative process, “I have the best job in the world because I can use anything [for inspiration]!” 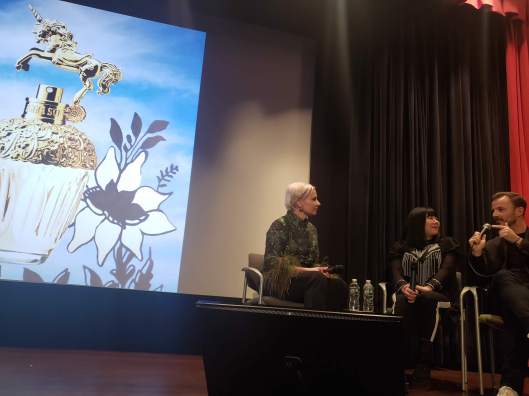 Ildiko, Anna, and Jérome with a Fantasia visual on the screen

Asked about his own inspirations, Epinette mentioned Chanel’s Coco Mademoiselle as an abiding favorite and a perfume that he particularly admires in terms of its construction and development.

Discussing his process for developing each Anna Sui perfume, he noted that the evolution of each fragrance varies, since a new perfume can be built on a previous fragrance in the collection (i.e., flankers!) or can be completely separate and take another direction.

Anna says, “He understands. We’re using words to create a smell and you need someone who understands those words and that magic.”

Note: All photos by me, except the photo of Anna Sui’s office from The World of Anna Sui, published by Abrams in 2017.

Bill Traylor, Untitled (Figures and Construction with Cat), ca. 1939–1942, gouache and pencil on cardboard. Image via The Metropolitan Museum of Art and Art Resource. . . #billtraylor #blackartist #selftaughtartist
Lucy T. Pettway (American, 1921-2004). Quilt, Housetop Pattern, ca. 1945. Cotton. Brooklyn Museum, Gift of the Souls Grown Deep Foundation from the William S. Arnett Collection, 2018, 2018.37.2. © artist or artist's estate . . #blackartist #quilt #geesbend #geesbendquilts #lucytpettway #womanartist #brooklynmuseum
Detail of Barkley Hendricks, Miss T, 1969. Oil and acrylic on canvas. Philadelphia Museum of Art, 1970-134-1. Purchased with the Philadelphia Foundation Fund, 1970. . . (I remember this painting well from the years I worked at the PMA..). #barkleyhendricks #philadelphiamuseumofart #blackartist #blackartmatters #portrait
Chakaia Booker, Bitches Brew (Act 1), 2002. Rubber, steel, and wood. Newark Museum. Friends of American Art Purchase, 2003.29 . . #chakaiabooker #sculpture #blackartist #womanartist #newjersey #newark
#blackouttuesday #blackouttuesday⚫️
From the BKM website: "In this piece, spelled out in sparkling coal crystals are the words “something in me wondered ‘What will happen to all that beauty?’” This quotation, from a 1962 essay by James Baldwin (reprinted the following year in the volume The Fire Next Time), is set over a blurred black-and-white image of the Million Man March, a gathering of black social activists in Washington, D.C., in 1995. The accumulation of crystals suggests the mass of participants in this historic event as viewed from above, while the juxtaposition of Baldwin’s words with the image of the march—separated by more than three decades—reminds us of the still-ongoing dialogue about race in America." . . Glenn Ligon (American, born 1960). [Untitled] (Crowd/The Fire Next Time), 2000. Screenprint with coal crystals on paper. Brooklyn Museum, Alfred T. White Fund, 2000.56. © artist or artist's estate (Photo: Brooklyn Museum)