Since France has been the center of Western perfumery for several centuries, and so many major fragrance houses have been based in Paris, it’s no surprise that Paris landmarks — including the cathedral of Notre-Dame de Paris — make cameo appearances in so many perfume advertisements.

Earlier today, Notre-Dame was engulfed in flames. The cause of the fire hasn’t been established yet. While we’re reflecting on this event, let’s take a break from the news footage of the conflagration and look back at a few images of Notre-Dame in fragrance ads…

This focus of the above 1954 advertisement for Bourjois Soir de Paris (Evening in Paris) is the couple elegantly dressed in evening-wear (plus that perfume bottle!), but the location is established by the view of Notre-Dame across the Seine. 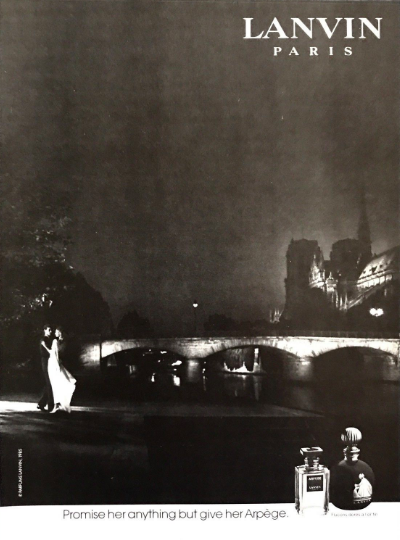 That concept is still very persuasive in this 1985 ad for Lanvin Arpège. This photograph pulls back further to include a couple dancing on a Left Bank quai, the Seine itself, the Pont de l’Archevêché, and a spotlit Notre-Dame.

This illustrated ad for D’Orsay Intoxication reportedly dates to 1946 (although it looks more like to 1964, to my eye? ) and has a stylized, dreamlike appearance. An almost ghostly white sketch of the cathedral seems to float just behind the square. The couple may have just purchased their little bouquet from the flower-seller in the background.

Speaking of floral arrangements, in this illustration from 1945, an ad for Plassard Bouquet de Paris, Notre-Dame is clustered with other Paris landmarks—the Eiffel Tower, the Arc de Triomphe, the Basilica of  Sacré-Cœur in Montmartre—in a tricolore nosegay.

What else is there to say? Notre-Dame has been inspiring people for so many reasons since it was constructed eight centuries ago. Let’s hope that it can continue doing so.