Happy New Year! Are you greeting 2019 with a Champagne toast? I’ll be celebrating at a friend’s place and there’s a good chance we’ll be enacting this ritual.

I haven’t decided on my fragrance for the evening yet, but if I owned any Yves Saint Laurent Champagne, I’d dab on a few drops. This feminine fragrance was launched in 1993 and joined a line-up of several other remarkable YSL fragrances, including Opium (1977), Rive Gauche (1971), and Paris (1983).

Released just before so many women began wearing “fresh” citrus-breeze fragrances like L’Eau d’Issey (1992) and CK One (1994), Champagne was a full-bodied Perfume (with a capital P) that overflowed with glamour.

Champagne’s bottle design, by Joël Desgrippes, was also optimistic and opulent. The bottle’s body was inspired by the form of a classic Champagne cork, complete with that its metal cap and little wire cage — which, I now know, is properly referred to as a muselet.

Via Wikipedia: “A muselet is a wire cage that fits over the cork of a bottle of champagne, sparkling wine or beer to prevent the cork from emerging under the pressure of the carbonated contents. It derives its name from the French museler, to muzzle. The muselet often has a metal cap incorporated in the design which may show the drink maker’s emblem. They are normally covered by a metal foil envelope.” 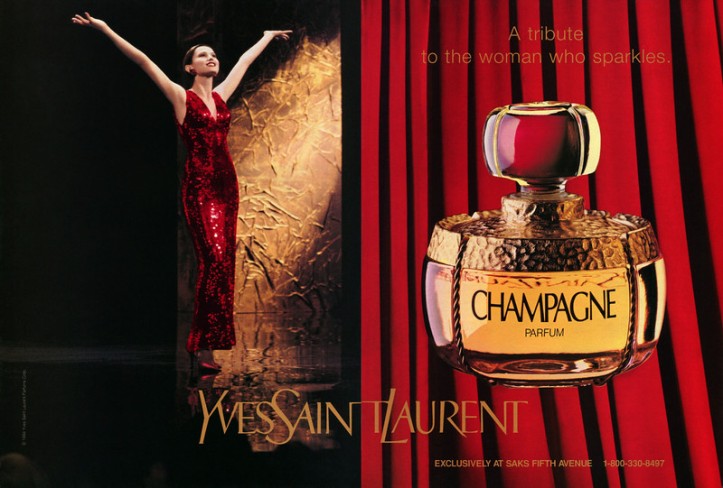 The English-translation taglines for Champagne were “A Tribute to the Woman Who Sparkles” and “The Perfume of Success.” The print advertisements showed a woman joyfully receiving applause onstage, wearing a red sequined gown that matches the curtains around her.

To mark the launch of YSL’s Champagne, the French jewelry designer Robert Goossens created a special necklace. Its goldtone-and-crystal chain suspends a pendant that’s a teensy Champagne perfume bottle, complete with a removable stopper that allows the bottle to be filled.

Goossens also designed a simpler goldtone lapel pin in the shape of the Champagne perfume bottle, probably to be worn by fragrance sales associates.

By now you may be wondering, “Does YSL’s Champagne still exist?” The answer is: yes and no.

When it was announced in June 1993, even before it officially landed in stores that fall, Yves Saint Laurent Champagne came under attack by French winemakers who protested that it broke laws protecting the Champagne designation. By the end of the calendar year, as the YSL website notes, “a lawsuit filed by the Comité interprofessionnel du vin de Champagne forced Saint Laurent to change the name in France. The fragrance was renamed Yves Saint Laurent and later Yvresse in 1996.”

Here’s a television ad for YSL Champagne, aired before the mandated name-change. Cheers!

Wishing you a sparking and successful 2019!